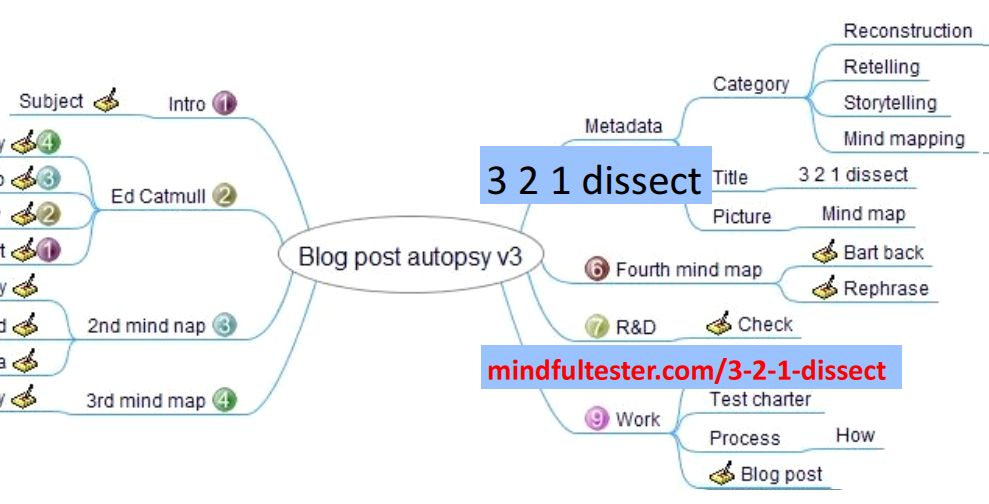 Looking for a new blog subject was not that difficult. At that moment I was making jokes.

The trigger for the post was my thought process during lunch. This painful moment reminded me that I have to careful with rehearsing. Especially in front of my family.

Jokes have to be rehearsed many times to get the right wording and timing. I do not mind a good joke. It just takes time.

The theme of the post was jokes. So I thought back which jokes I had used in the past.

This way I remembered the University of Technology. In my graduation year there was no presentation program. I wrote with a marker on transparent plastic slides and used an overhead projector to show the slides behind me.

I cut the slides to pieces, so I could add special effects like vanishing lines. This could be funny.

From then I started my journey to today. All kind of moments of used jokes I added to my list. After the first draft I had a mind map with two levels. When I looked more closely, I saw an unordered set of stories.

This is not particularly bad. Ed Catmull calls it the ugly baby. The creative process starts with rough ideas. At the early stages the writer has to be patient. It can become a beauty of a story.

This brainstorm did not automatically lead to sections. The paragraph about Harry Potter reminded me of a song of Queen. That became my first section title.

For another section I added ‘Expect the unexpected’. This advice is used too many times, but it was consistent with the vanishing walls

Next stage was to convert short word descriptions to snippets of stories. This was not difficult. At least I had some Fieldstones or stories to share.

In the second version of the mind map I continued to add notes to the branches.

The Fieldstones were short and hard to read. I had put pieces of my memory in a mind map without any transition, so I added some words to describe the setting.

Now I had to structure the mind map. I had already ordered some branches, so I added the first branches in one group.

It was about using jokes in the present and future. The next section was focused on my workshop at TestBash Netherlands. If someone without a test background can understand my jokes, then it is good.

The third section was about jokes in the office. Yes, I like the humour of programmers.

The last section was a transcript of some jokes during a presentation about a performance test. During the rehearsal of the jokes I thought about some visualisations to increase the impact of the jokes. These movements were added in the last weeks before the talk.

The grouping of branches led to the following sections: ‘expect the unexpected’, ‘practice makes people smile’, ‘it’s kind of magic’ and ‘what about this?’.

There was an extra section about twittering. I started with a simple story about my reaction on a single tweet. It began to grow. I still had the tweets stored in a mind map, so that saved me a lot of typing.

Then came the editor question: does it fit? I wanted to write about making jokes for my own presentation. I marked the branch with a red cross. It would not be contained.

A frequently used branch for me is Metadata. It is a way to remind me to add extra information to the post. I had found the Chicken picture beginning this year and this became the banner.

The categories were more difficult than usual. How would I categorise a post with jokes? So I introduced ‘Fun intended’. It is a variation on ‘Pun intended’. Fun rhymes on Pun, so that’s good. Fun!

My work title of the blog post was ‘Adding humour’. That was good enough. So I made a link from the title to the central object.

[Update author: my opinion is not the same as the author of the referred characters, but I believe in the goodness of the good characters.]

The Office section contained a reference to Harry Potter and that is difficult to follow for people who do not know this character. I solved this by using some common sense humour.

This was one of the few times that I used a joke as a writer in this post. Normally I add more jokes to make a post more digestible. But this would lessen the effects of the described jokes.

The Twitter section was still in my mind. Was it really off theme? I noticed that I was not the only one cracking jokes. Other people like the street artist and the scrum master made jokes about things unrelated to my workshop.

What the heck.
So I decided to put it back in the blog post. Then the editing started followed by reediting. Etcetera.

The research part is a rewarding one. I checked facts in my blog post. For the Harry Potter section I had added a joke about muggles. While watching a movie I heard the American word for muggle. I went into a bookstore and looked up the word in the book with the screenplay.

The proper spelling of the quote from a song of Queen was checked using a search engine. This ends my dissection of my previous blog post. I hope that you and I learned something. I certainly did. I basically wrote down my steps and thoughts.

On my work I have test charters and bug reports which describe my actions. I can justify my tests.

For me it was one step more to tell a story to testing peers at a test conference.

Maybe you have something to share. Really. Just take your time.

Some experiences of you are really worthwhile for your peers. Especially things you just do automatically like me writing a blog post on a smartphone using mind maps.

There is a supporting testing community out there constantly looking for short and long stories, talks, and workshops for testers.
Please have a look. 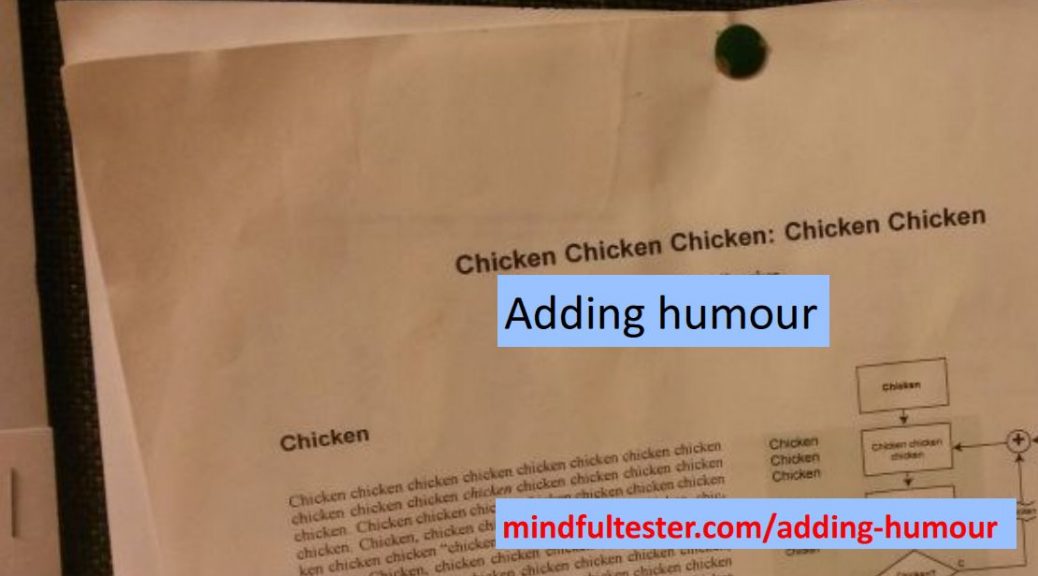 In a white room I was asking questions. After each answer I posed a new question. Then I asked something and the whole joke collapsed. Nobody noticed, but I had taken a wrong turn. I felt bad.

The white walls vanished. I realised that I was having lunch at the kitchen table. One of my kids looked curiously at me. My wife had a concerned look: “Is everything Okay? You were shaking your head.”
“I was just thinking.”

A century earlier I was making a presentation. One of the must do’s of a graduation is a talk. And I really disliked the formal nature of the talk. Why could I not add some jokes?

After my graduation talk a female student said with a smile: “This was not what I had expected.”

Years later during a company meeting I showed the last slide with Edutainment in the footnote. It contained the name of a founder of the company. A saleswoman started to laugh out loud.

After the lecture the smiling Practice Lead gave me a high five. Somehow I had the right mix of statistics, testing, and jokes.

On the European Juggling Convention in Rotterdam I met a street artist. He was a small ugly man and had the look of Catweazle. It was hard for him to earn his money.

When he did not have enough money, he told, that he would stay in their village. And marry one of their daughters. “Then they would give me enough money for the bus.”

My standard procedure for adding jokes is to do this in the last weeks before the presentation. This time I started months in advance.

For my slides I needed pictures. After taking the picture I asked one of my kids to have a look at my workshop slides. “This is the place where I will put the picture.” Then I took the time to explain the English joke in Dutch. I saw a big smile.

Weeks earlier I showed my slides of my workshop at TestBash Netherlands to a friend with no IT background. He smiled faintly.

This Fieldstone is not particularly focused on making jokes for my own presentation. It is only about the process of joking.

March this year on my way home I saw a tweet of Bart Knaack: “Test”. Some other testers reacted and he replied that he was using IFTTT. ‘If This Then That’ can be used to automate steps.

Wait a minute. He was preparing for a presentation of a test conference I would attend. It was about IoT or Internet of Things.

In my mind I visualised his presentation platform. So the tweets to him would be processed by IFTTT. This on line service would trigger an IoT device which in turn would perform a useful action for Bart.

If I tweeted him during his preparation, then I surely would draw his attention. I would tweet an explanation for IoT. I thought about the Rule of Three. Make that three explanations.

In the train I noted them in a mind map program. Why not three tweets? I continued to combine the strangest English words I read or heard while using different interpretations of I and o.

After crafting 3 tweets I just went on. This was fun. Then it was time for a tweet storm.

“IoT
Internet of Thieves?
Ignore other Things?
Imagination or Truth?
: ) “

“IoT
Insalata on Top?
Interesting or Threatening?
One Zero Two?
: )“

A short explaining answer of Bart followed: “Internet of Things”.

I was in turbo joking mode and tweeted back:
“In other Thoughts
– One option Though –

During the stand up my boss had some doubts about my actions.
“I dropped it hard.” I stressed it.
“Hopefully it was not broken.” My scrum master remarked.
“If it is broken, then I just need some glue to fix it.” I replied.

During my testing career I had noticed that programmers had their own kind of humour. It is a wonderful way to make contact.

Let me sketch the context of another situation. In one book a favourite main character had to board a train on Platform 9 3/4. He had some difficulties to find it. This is completely understandable for muggles and No-Majs.

One morning I showed my smartphone to a dev:
“This picture I took at Utrecht Central Station”: Platform 9 3/4. He started to smile.

At a Spring Event of TestNet, the Dutch Special Interest Group in Software Testing, I had one of the last talks of the day.

I advised them to put you at the end of the schedule, because “Han Toan can tell in an engaging way.”

I had just started my talk about a performance test.
“This year they finished the renovation of Rotterdam Central Station. In the hall you can see this light.” A picture of the light with lots of bulbs and poles was shown on slide 6.

“My wife really liked this light. I did not consider to give it to her on Mother’s Day.” [a few days earlier]
“The lights are blinking.” while opening and closing my hands continuously at shoulder level.

“If I would place this light in my house, I could not walk straight up in my living room and my kitchen.” I lowered my head in an uncomfortable position. Smiles appeared.

“This light is to indicate the meeting point.”
“Ze noemen de lamp De Wolk. In het Engels The Cloud.”
[They call the light The Cloud. In English The Cloud.]
“For the performance test we used the cloud.”
Now I had the full attention of the audience.