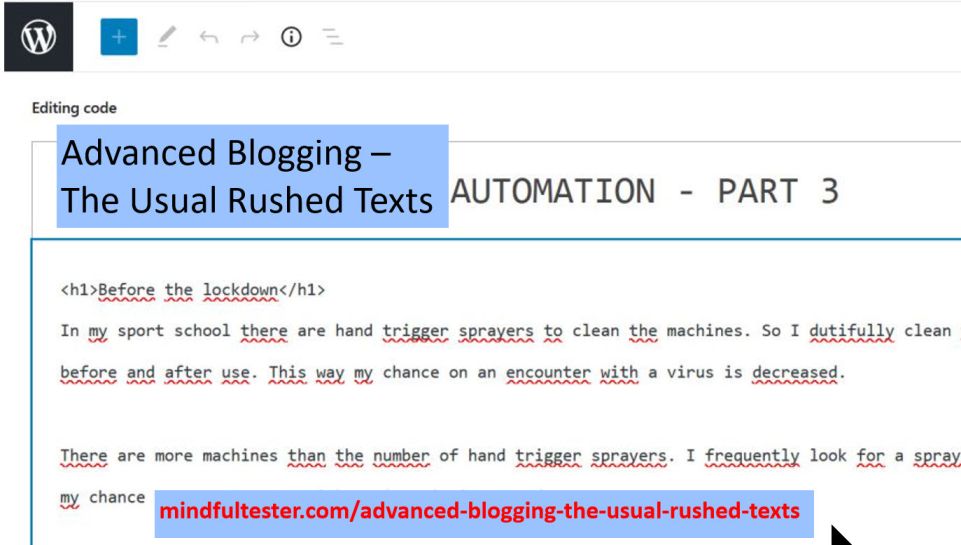 The first time I noticed the speed of the screen reader of a blind person I was overwhelmed. I barely could catch each word. The speed was at least twice the speaking speed of a person.

Imagine a friend who excitedly talks about a great job offer.
It sounds like a rushed text.

“Are you a member of the Guild?”
“Last time I checked.”

Show me the code

The default editor in WordPress is the visual editor. For beginners this is a great way to begin. The text is shown in the same way the visitors will read it. There is a catch. Sometimes the editor will change the look and feel.

For fast writing, HTML provides a nice structure: headings. I just put some keywords or short sentences in the file. Jerry Weinberg called them fieldstones. I kept the rest of the words in my mind and added them later on.

Let me show and tell

in the visual editor the picture had a bad contrast. I thought that I shrunk the picture too much. The picture looked good in the preview mode.

If I did not use an alternative text, then the screen reader would read the following aloud:
“Just to be sure I turned off the highlighting.
https://mindfultester.com/wp-content/uploads/2021/01/mindful-tester-p3-1.20-no-highlightingboxes.jpg”

In this case NVDA, a screen reader, used the path and file name instead of the empty alternative text.

“This is not according to the code of the Guild.”

If I did use a short alternative text, then the screen reader would read the following aloud:
“Just to be sure I turned off the highlighting.
Dialog without highlighting”

This sounds like a rushed text. In the picture there are more details worth mentioning.

“This is not part of the deal.”

In my blog post I used a descriptive alternative text, then the screen reader would read the following aloud:
“Just to be sure I turned off the highlighting.
In the left image or baseline “Cap” in the username is shown, in the right image or checkpoint the username is empty. In the right upper corner, there is a thumb down button.”

Let me break down the structure. First, I wrote a text with a short introduction to the picture. Then the alternative text was a detailed description of the picture. A screen reader user would hear a normal story. This way I told a story with normal texts and alternative texts in a natural flow.

For the third blog post about Visual TDD in Test Automation I had a separate file for alternative texts. This was handy for the consistency of the text. But I disliked the continuously switching of files: open WordPress, go to the location of the picture, open the editor with the alternative texts, copy the desired text, and paste the text at the right spot in WordPress.

Even worse, I needed to do some spell checking.

I have a spell on you

The problem with blogging is that the mind is faster than the hands. This often leads to spelling and punctuation errors.

For the creative mind, speed is essential. I could lose my train of thoughts. This is why I gladly accept any typos.
It sounds like a rushed text.

WordPress uses the browser spell check. This is focused on the right spelling of the words. The syntax of the sentences is ignored.

If I spell check my blog post, then I go to the visual editor. I copy the text into my favourite word processor and start the spell checking. Because I was worried about the layout, I change the text in both WordPress and the text editor.

Fine, but what about the alternative text?
A simple solution is:

My advice would be: search for alt in the html file and copy the stuff.

For the selection of my alternative texts, I chose a complicated solution.
This paragraph is meant for people with an IT background. You are free to skip this.

If you are using a screen reader, please set the interpunction level to all.

I opened baregrep, a shareware tool which can filter lines of codes with the text “alt”. This basically means: give me all the lines with alternative texts. I was lucky that I did not use words like alternative or salt.

I copied the output.

The next step is to use VIM, a free software program with a typical interface. I pasted the text in my word processor.

The file contained one picture with an alternative text on a different line.

The whole command removed all the text from the beginning of the line until and including “alt=”in every line.

The whole command removed all the text from ” until the end of the line in every line.

The last step is to copy the lines into the word processor for the final spell checking.

For the people who like to quit VIM without saving:
:q!

Back to Media for the change

Then I updated the alternative texts in Media, where all my pictures are stored.
If you are using a screen reader, you can set the interpunction level to your favourite setting.

Here is the change

A few days later I noticed that the wrong alternative texts were included in the blog post. I tried to figure out what happened.
Who was the usual suspect?

The moment I inserted a picture from the Media in my blog post, a copy of the HTML code was used. Any later changes in Media remained there. So I had to change the text again in the code editor.

One of my kids summarised my story as follows:
if you send your homework to school, then you send a copy of the file.

I could have chosen to replace the old pictures in the blog post with the latest pictures in Media. I was afraid to add the wrong picture. Then I should not forget the resizing.

So I edited the alternative texts in the visual editor.

Listen carefully. I only tell this once.

Pro tip: use the screenreader to read your text aloud. Some typos are difficult to see, but are easy to hear.
Just hover with your mouse over the text and hear it. 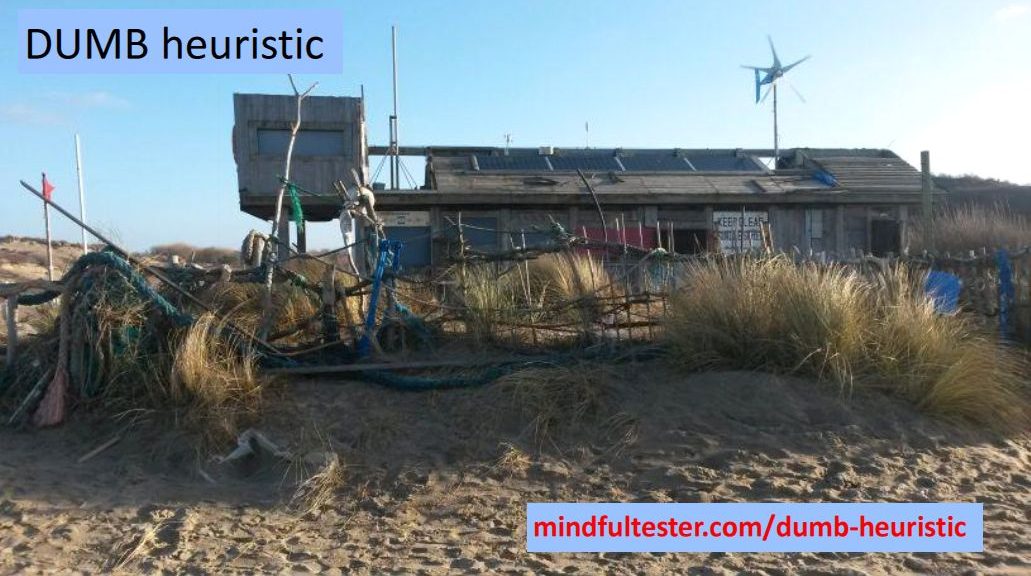 During the Rapid Software Testing course James Bach advised to name things. If I cannot tell, what I am doing, my boss would think: “What the < beep > is he doing?”
So after the course I came up with the DUMB heuristic. This heuristic I use frequently during my testing.

Suppose my boss asks me how the testing goes. My answer could be: “I do uh my best.” A busy tester is always good, but if I am too busy things might go wrong. All my energy and brain power are focused on the work at hand. I forget to think. That’s DUMB.

When I figured out my heuristic, I had to find some smart explanation for this abbreviation. It became Do Uh My Best. Most heuristics are acronyms or lists of words. In turn every word is explained in detail. You know: turned upside down and shaken. But I just stick to the abbreviation.

Some readers have a good reason to ask. So hold on. The emphasis of the heuristic is on Uh. This is an alarm bell. Hesitation is a sign, that too much is going on in my head. I might forget to pay the deserved attention to the real problem.

This following discussion I had several times with my scrum master:
“I am writing test cases.”
“Why do you make test cases?
How often will the tests be executed? Who will maintain the test cases?”
So I was doing my best. And my scrum master got an Uh out of me.
He let me reflect on my work. What was I doing? And why?

Many test heuristics I know are acronyms. Some I do use. The S in SFDIPOT stands for Structure, how is the application under test built? So which components do I have to test? Etcetera.

If I apply this to DUMB then I would get things like: Do is the activity I am involved at that moment. It can be taking notes in my test charter or just thinking. Etc. Etc. The only thing I need on that moment is a short reminder to reflect on my work. DUMB. One syllable. Keep it sweet and short.

When do I use this heuristic? If there is a lot of work to do. When I have hours of straight testing ahead, I can go in my little cocoon and do something testy and something nice comes out. Tadah.

What about the focus and defocus stuff? Most of the time I use this when I got stuck. What can I do now? Let’s take a step back. Now I see the big picture. I figure out at a high level. Let me zoom in.

The point is, that doing my best is equal to doing stuff which is in front of my nose. I just pick it up and start running. Maybe I get it done today or this morning. Completely forgetting to ask for the reason. And that is DUMB. NOK?

When I was writing this blog, something hit me in the face. That was my imaginary hand palm. This so called heuristic is maybe already known under another name or in another way. Like a proverb.

And yes Madam within a few minutes the following proverbs came in my mind:
Eile mit Weile
Dépechez lentement
Easy does it

A day later followed by
Haastige spoed is zelden goed.

So why am I not using proverbs to keep my testing right? It is too long. Maybe a short heuristic could be useful.

“My scrum master would say something like Does it help?

This is really STUPID which stands for Some Thing …. I Do. UP are two words, so ….

So you are a mindful reader. Congrats. Here is the bonus.

Why did I not throw this blog post in the waste bin? People already thought about it and distilled their experiences to proverbs.

It is about my thought process. I do not want to stop thinking. Once in a while I discover that other people already have figured it out. Sometimes I find something new. But apart of discovery of new thingies it is about thinking thingies through. Getting better to verbalise my thoughts and explain them to you the reader.

That was what I forget a while ago. Thanks for the attention.

Optional reading Also Known As scientific stuff for nerds like me
When I Do Uh My Best, System 1 is operating. More information about System 1 can be found in this blog post.

WYSIATE stands for What You See Is All There Is. If I am too busy, I forget to look for other relevant information as mentioned in Thinking Fast and Slow.

The Lindy effect is about using knowledge especially from books. Thinking Fast and Slow is quoted for years by some testers. If a book is relevant for 5 years, it will probably remain relevant for another 5 years.