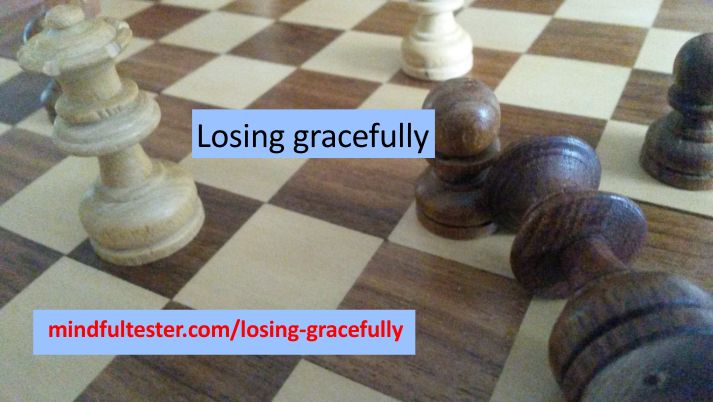 “Han Toan, something has to be tested.”
I got a short briefing, csv files and decent specifications. A senior tester and I had to test an interface. He started sprinting: opening a csv file and logging bugs. I froze. No time for writing test cases and reviewing them. I confessed to the tester, that I was uncomfortable with the situation. I tested a csv file, but I was losing gracefully.

The following text is translation of a text I found in a Dutch farm:

“Theory is: if one knows everything and nothing is right.

Practice is: if everything functions and nobody knows why.

In this company theory and practice are combined.

Nothing is right and nobody knows why.”

One evening I was playing Skip-Bo with my wife. My plan was to lose gracefully. So I forced myself to play the wrong cards. Her position in the game improved gradually. She was happy, so was I.

After a while I was holding too many good cards in my hand. There was no way, that I could hide them for long. I would either win or lose awkwardly. The last option was worse than the first one.

In the months after this clumsy situation I tried to repeat the steps during other games. What was the first wrong move I made? What were my following strange steps? Based on my observations I was able to extract a single rule to win or heuristic.

I think, that I might be able to find scientific evidence for my heuristic. But I chose not to, because it worked. That was my goal.

No log in required
During an afternoon session James Bach told about testing without scripts. He was in a hotel lobby and saw a computer. He described the techniques and heuristics he used to get access to this computer. At the end he succeeded.

I was in the library. Killing my time with browsing newspaper articles. But that was not exciting after a while. I had an appointment within half an hour. In the meantime there should be something to be tested. I was still staring at the computer, when I remembered the story of James.

The computer environment had 2 access levels for normal users. A guest could use only basic functions, which were also limited. I did not have a library subscription, which would grant me a time slot to use standard office software and the browser. I could buy a time slot, but that would lower the challenge.

So I started testing the applications. There were many search engines for news and books. Then I noticed, that I could open the browser. It did not take me much time to go the download area. A document with Resume in the title drew my attention. I expected an error message, when I would attempt to open the file.

Then I actually opened the file. I had access to Word. And to personal data like name, address, birth day, …. I got more information than I had anticipated.

It was time to inform the information desk about this particular situation. One of the women acted adequately:
“Did you log in?”
“No. I did not log in.”
One brief look on the computer screen made her check the other computers in the library. She asked me the steps to reproduce the error. After my answer she continued with:
“After logging out the cache should be cleared. I’ll contact the system administrator about this situation. ”

I went back to the computer, which still showed the resume. I closed it. Then I noticed, that a pdf reader had been installed on the PC. One of the recently opened files contained passport in the name. One click gave me a high resolution full colour scan of a passport including social security number and picture of a fellow citizen.

I had made a little start. To explore in unknown environment. Without a script. 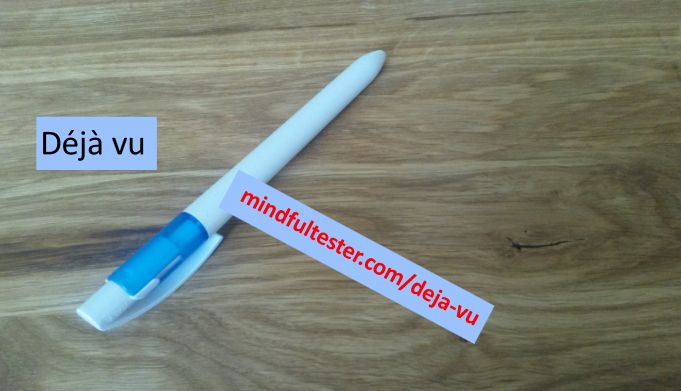 When I was looking for a parking space for the car, one of my kids said:
“That car has the same colour.”
I said something like “A huh”.

I parked the car and my wife left to do some fast shopping. I stayed with the kids. After a few minutes I noticed movement in the rearview mirror. My wife had changed her coat, hair colour and glasses. And she had shopped.

“Something is wrong.” flashed through my mind. I turned around to have a good look. The woman looked me straight in the eyes. She was surprised. Her view shifted to the license plate. Then she looked to me with an apologising smile.

She slowly turned around, looking for her car. Then her eyes fell on a car with the same colour, the same model and the same brand. And off she went.

The waiter and the woman have some things in common: first they used the auto pilot (System 1). Then they forced themselves to think (System 2). This leads to the following graph:

The following story is fiction. So enjoy.

Steve was waiting for things to happen. For more than one hour it was just him and his pen. The other stuff was boring: the same people moving on the screens in the same patterns. He noticed, that a pizza delivery boy parked his car on the parking lot. He just knew, that it was a pizza delivery boy. While many of his colleagues were regarding strangers as potential criminals, he just looked and knew.

The young man came to his desk:
“One large pepperoni pizza for mister Neal.”
“Sorry”, Steve replied. “You are not allowed to deliver, because your delivery is not on the list.”
Then a phone call came in.
“Hi Steve, John here. I forgot to notify you, that a pizza would be delivered.”
Steve checked off the following points:

Outside a car stopped. The same man came to Steve’s desk. Steve looked at the first car, which was still parked outside. There was something wrong. The pizza delivery boy looked genuine.
“He’s real.”, flashed through his mind.
Steve asked: “One large pepperoni pizza for mister Neal?”
“That’s right. Can I deliver the pizza?” with the same voice.
Steve looked at the monitor, which showed the same delivery boy in the elevator.

He looked to the pizza delivery boy.
“I have to write down the delivery time.”, while tapping 3 times on his watch. 3 short taps is S in morse: Social engineering threat. He felt 3 short vibrations of his watch. Now Steve had 3 minutes to evaluate the situation, before the alarm went off.

In the meantime another pizza delivery boy with the same face had come to his desk:
“One large pepperoni pizza for mister Neal.”
The same face, the same suit and the same voice.
“He’s not an actor. The body language is from a reluctant man trying to earn extra money for his study.”
Steve looked to the two pizza delivery boys standing for his desk: they looked like twins.

John was a hungry programmer: he ordered at most two pizzas at a time. Steve recalled, that John had ordered just one pizza. He pressed his two hand palms on the desk to push himself up. This way he concealed two small movements. With his right index finger he pushed the Down The River button. People inside the building could only leave the building: elevators would only go downstairs; doors would only open to the hallway. Etcetera etcetera. Annoyance crept in Steve’s mind:
“This is the real thing and my intuition failed me for the first time.”

With his left index finger he locked the control panel in front of him. While Steve was standing at ease, he casually placed his right palm on his watch. The watch scanned his palm and vibrated for half a sec: the alarm was confirmed. He imagined himself as a concrete wall. Now he had to stall, until the backup would come. The guitar music from the opening scene of Pulp Fiction started to play in his head. He defocused to get a better view of the situation. This way he could see the two pizza delivery boys and the entrance at the same time. Then tensome pizza delivery boys entered the building. Packed with pizza boxes. The trumpets in his head began to play harder.