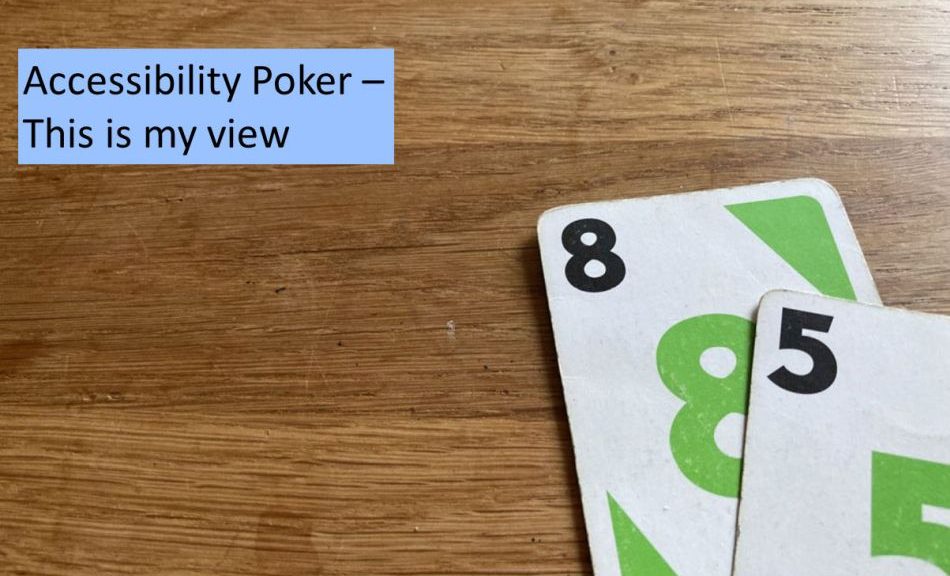 Accessibility Poker – This is my view.

This is a friendly reminder, that all stories with George are fiction.

The story so far

“Hi George.”
“Hi Polly.
How are things going?”
“During the A/B testing something noticeable happened: sales dropped enormously.”
“What happened, Polly?“
“They changed something to improve accessibility, George.

There was a new page and they thought that they did something pretty smart. Before, it had only a picture and some texts and they replaced it by a movie with a sound track and captions.

If someone was blind, then she or he could hear the movie. Deaf people could read the captions in the movie. We thought that we did a decent job but the A/B testing proved otherwise. We cannot find a solution. George. How do I solve this problem?”

“Polly, your team thought that people were either blind or deaf. If someone is both blind and deaf, what would be the use of sound and captions of the movie?“
“They cannot hear the movie and they cannot see the movie, so they don’t get any information. George. That is really insightful.”

“There is something different.
In May sales also dropped. We did the promotion for haptic gloves. Something went wrong though. The sales went up, after the promotion article on the homepage disappeared.“

“Could you tell me more about this article, Polly?“
“Of course, George. It was for a new haptic glove for the fashion industry. It also included a movie.”
“Can you still play this movie, Polly?”
“Sure, that is easy.”
“Let’s do a simple experiment: you play the movie without showing it to me. At the same time, you tell what is being shown for 10 seconds.”

“George, I found the movie. Let me start:
A user with haptic glove … fabric … screen … appreciation …. Order… happy.
That were 10 tough seconds. It was too hard to tell what happened on the screen. ”

“What would usera with a visual impairment experience?”
“I think that they have a lot of problems to recognise the pictures, George.”
“Indeed, for me this story would be really difficult to follow.”

“You said: “me”.”
“I mean a user with a visual impairment.”
“George, you have a visual impairment. That’s why you got a headache, when I was quickly browsing a website a few calls ago.”
“You are smart, Polly.”
“Your secret is safe with me, George.”
“Thank you, Polly.”

“George, something with the Accessibility Points will go wrong.”
“What do you mean?”
“At the moment we have personas for a blind person and a deaf person. Now we need personas for a blind and deaf person and a person with a visual impairment.”
“You know, that there are different visual impairments, Polly?”
“then we need to use more personas. This is my view.

“It’s almost 9 o’clock. This was our last call. So, it’s time to say goodbye.”
“There is no other meeting lined up for me, Polly.”
“In that case I have a special offer for you George. You can work for our company full time get all usual benefits like health insurance stock options. A lot of colleagues are thrilled to work with you.”

“Polly, half hour a day is more than enough work for me.”
“George, this is hard to sell to management though.“
“I’m sorry, Polly.”

“Thank you for all the support. My team and I really appreciated it. Take care. Goodbye, George.
“Good luck. Goodbye, Polly.”

“Good morning, Polly.”
“Good morning, John.”
“Did George take our offer?”
“I’m afraid not.”
“Did we not show that we have the right mentality and use technology in the right way?”
“It was something different.” 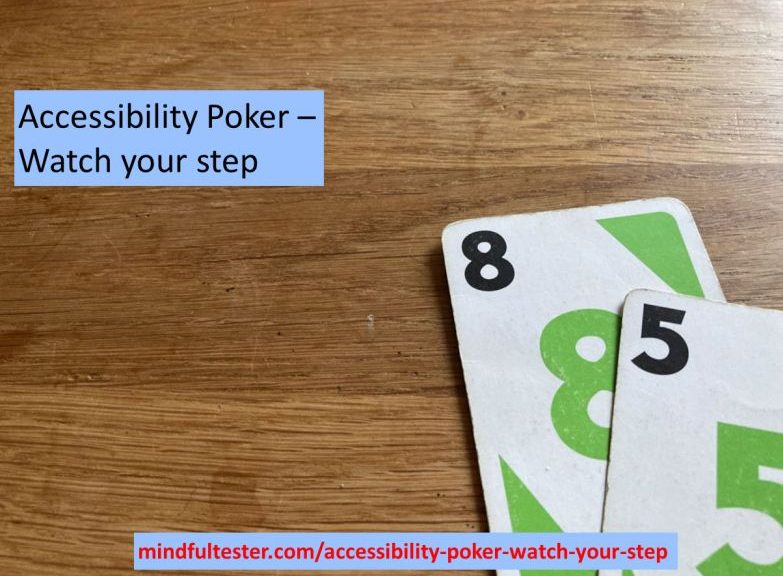 This is a friendly reminder, that all stories with George are fiction.

The story so far

“That is strange. You did not wave back, George.”
“I blocked your camera. The last time I got too many impressions, when you browsed a web site.”
“If I promise not to share my screen, are you willing to look at me?”
“That is fine.”

“Polly, how are things going?”
“Since our last call my team made a list of all the suppliers of components for our web site. There were a lot. I never thought that there would be that many. Any way, we focused on accessibility testing on these components.

Most of them were accessible or they could be made accessible in an easy way. But we had some troubles with the cookie banner.”
“How did you solve this, Polly?”

“The same day an account manager called me for some clarification. So I showed some bug reports. He was genuinely shocked and wanted to help us.”
“This sound good to me.”

“Then the talk changed. He noticed the Accessibility Points of the bug reports.
So I told him that these points represented the amount of energy used by disabled people. Furthermore actions with more than 3 Accessibility Points should be avoided. Then he started to talk about velocity.”

“Is this supplier agile?”
“Maybe. So I told him that it would be great, if his company would deliver the solutions within a few weeks. According to him velocity was not about the speed of solving the tickets, but about the velocity of the user.”

“Was he expecting that the user would solve his problems?”
“I was having the same thoughts and asked him for a specific example.”
“He talked about the state of the toggle button, which could not be detected by a screen reader. If this was possible, then the number of Accessibility Points would drop to 1. This way a blind user would go faster. The velocity would be higher.”

“I told him that I could follow his explanation, but it was confusing to use the word velocity for a user.”

“The first demo went right. It was simple to navigate with a screen reader while the screen was turned off. The account manager started again over velocity, which lead to a lot of confusion.
Soon another demo was announced. This time a blind person would use the improved cookie banner.

This demo was cancelled at the last minute. The programmers still needed to do some tweaking. In the meantime we already used a cookie banner from another provider. After a few weeks of promises and delayed demos we definitely switched from supplier.”

“It looks like everything is solved, Polly.
What kind of help do you need from me?”

“Polly, can you tell me more about the first demo?”
“The screens were quite compact. It only contained a short understandable explanation and a single question. The tester in our team could easily navigate these screens using the screen reader.”

“Polly, I have another story to explain this to you.”
“I am all ears, George.”

“During one of our calls you told me that your husband and you share running as a hobby.
Now imagine that you are trained well enough to run a whole marathon. Then there is an announcement in the newspaper that there is a marathon in your neighbourhood. You both buy tickets.

On the day of the race both of you want to use the car, but it does not start. So, you put on your running gear and walk to the bus stop nearby. You missed the bus by minutes. This is no problem, because a train will be leaving soon. So, you run to the railway station.

Again you have bad luck and miss the train. So, you decide to run to the start of the marathon. After one and half hour of running you arrive.”

“George, I would not run the marathon.”
“You have trained well and you have bought tickets.”
“It is just too long.”
“You made it to the start of the run.”

“How would you summarize it?”
“Watch your step.”
“This can still be confusing with velocity, Polly”
“Maybe I should say: watch the total number of steps.”

“Let me do a search on Twitter, Polly.
In the chat I put a link to a tweet of Ron Jeffries that story points should be added.”

“George, I do not understand, what you mean with the running story.”
“You told me about the small screens in the first demo. What do you think what happened with the biggest screen?”
“It had about 30 toggle buttons. I would expect a lot of small screens. I would stop after 20 screens. This is really unpleasant.

Wait. You compare a screen with a step.
This could be a good explanation for the delayed cookie banner demos. Even a person without sight problems would leave the website in frustration.
Thank you for the insight.”

“Hi Polly.”
“Hi John,”
“Did you discover what might have gone wrong with the cookie banner supplier? Did he use the wrong tools?”
“It was something different.”