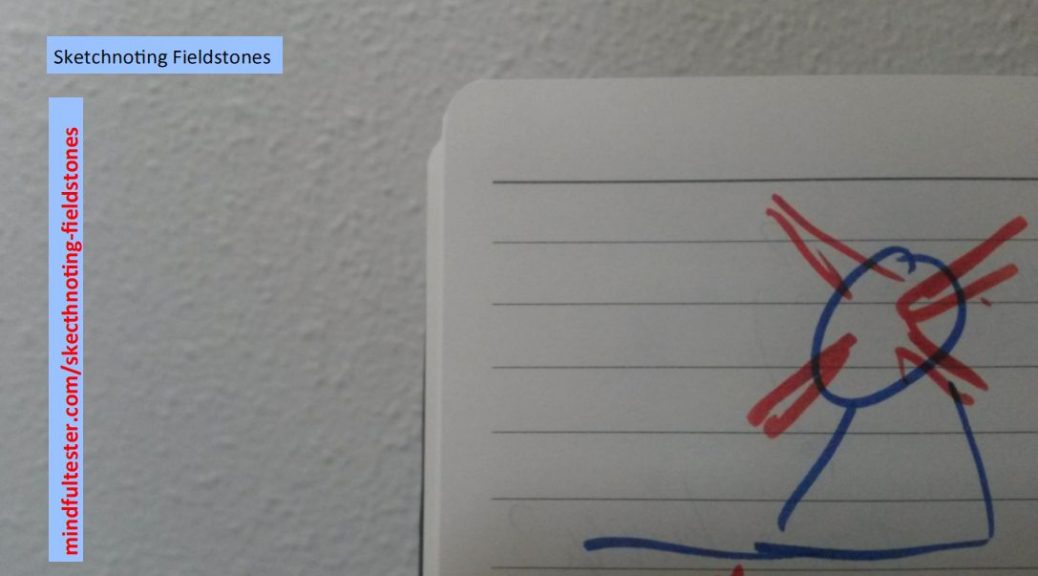 My workshop “An Appendix to Visual Testing” had been accepted. It was time to make sketchnotes.

This spring I created a 30 minute presentation about Visual Testing for a test conference. On Twitter I had read about last minute changes because of other obligations of the speakers. Although I had not been selected for replacement, I still carried my presentation with me on that conference. Digital files are so easy to carry around these days.

Using the Fast Fast Forward button I could show the delegates some highlights of my testing solutions. I try to avoid this style. I prefer Try and Remember.

With no conferences on my program I stocked my presentation on my hard disk. For the record, before 2016 I was not particular fortunate with this proposal at at least three other test conferences on this planet.

In the following months I reused the workshop idea twice for different conferences. Two polite thankful rejections followed. I still had faith in the workshop, so I pitched it again. Then I got good news: a half day tutorial at Testbash Netherlands.

Given a half day is 4 hours when I have a presentation of a half hour then I have to fill another 3 and a half hours. Emily Bache once talked about Arrange, Act, and Assert. At last I had arranged my workshop. So I had to act in order to assert that I would have a half day tutorial.

Luckily my presentation was a dehydrated version of a workshop. With enough water I had a 3 hour workshop: 3 examples including supporting stories with in depth exercises.

One of the first things I did was buying a small notebook. You know one of those booklets with lined paper pages and no battery included. In this little book I captured my ideas visually for this workshop. I intentionally put mind mapping aside for a while. I wanted to make a visual journey for my delegates and myself.

The last years I saw sketchnotes. I had my doubts, but I started to like the doodling, the seemingly unstructured way of drawing and writing. Instead of the clockwise structure of mind maps I had more freedom to make my notes. I even could draw first and write later. That is a big + for a visual tester like me.

There were more surprises with sketchnotes than I expected: one in depth exercise started as a simple design exercise. Within a week it lead to another intriguing exercise. My homework is to describe the solution using visual stuff. There are some times some things do not feel like work.

The introduction of the workshop was another creative process in progress. By making a story board I could draft more than 10 versions and find the right start.

During the preparation I slowly picked up mind mapping again. I used it for structure and overview. In the meantime I found other things to share. Jerry Weinberg calls them Fieldstones. I used to call them Blog Ideas.

In my quest to improve my blogging I found “Weinberg on Writing – The Fieldstone Method”. This nice book gave me some hints to gather pieces of information and group them later on. While I thought about my workshop, I made notes.

My fieldstones were sketchnotes which filled my little notebook. Things waiting to be told. 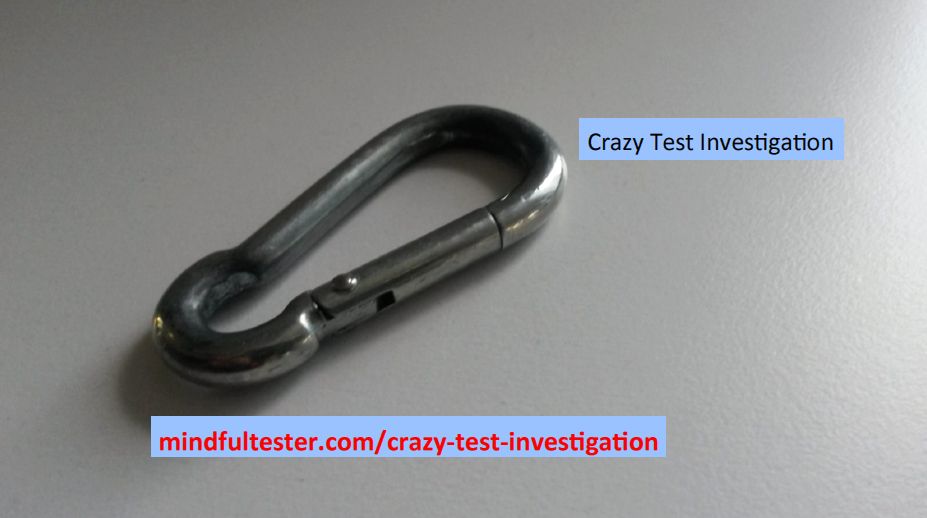 Summer in Europe and it was warm. I was thinking about an upcoming challenge of #30daysoftesting. I had to create a crazy test.

What about a crazy test with the ultimate penalty, the loss of LinkedIn? That would make me crazy.
Can you imagine that?

It all started with this

Losing my Twitter account is bad, but my LinkedIn account would be worse. I would basically be non existent and therefore have no credibility at all. Especially for recruiters, if they still could find me.

In order to minimise the loss I made a backup of all my contacts, my blog posts , and my profile including recommendations. Check.

Then I hit the Publish button.

I got a final warning. I confirmed my action.

In the days after the publication I expected a polite mail from LinkedIn to express concerns with the contents of the blog post. And an explicit request to remove the blog post. Nothing happened.

Actually tensome people read my blog post. It did not go viral. Nothing to report about. But I just did.

Try hard with a vengeance

A few weeks later it was summer in Europe and it was warm. I thought about my blog post, that did not concern any people, except me of course.

Obviously the inconsistent use of settings was of no concern for any one. If someone looks to a LinkedIn blog post, the area, where the reader lives, the job title, and the industry of the reader are collected in sets. If I would have one reader a day, then I could easily combine the information. Nobody would flinch, if I told in which industry she /he worked. That left area and job title. This still had a low scary level.

I had the perfect plan to increase the level of craziness for my test by changing the tone of voice. So I twittered: 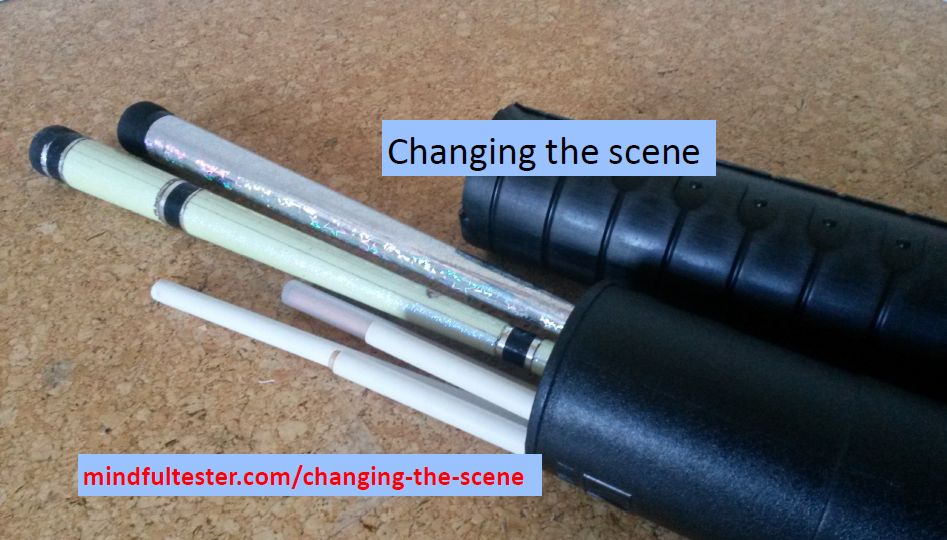 Did I ever spend hours on a presentation? And my own money on traveling for this talk? On top of that vacation leave? Yes, I did.

When I talked about it with other speakers, it did not get even better: astonishment or silence.

I paid to speak.

In the second year of this century I was a volunteer at the European Juggling Convention in Rotterdam. This low budget convention needed volunteers to break even. So I paid for the convention and spent hours to help the organisation. Afterwards they paid any costs I made including the convention ticket. My badge of honour was and is the crew T shirt.

Being invited to speak at a test conference is considered an honour between testers. An invisible, but mentionable badge: I got congratulations. On a conference people shook my hand and wished me success with my talk.

There are several privileges for being a speaker. And still recognition in words may not be enough. Bills have to be paid. I was never hired, because I was a great speaker. Or an engaging blogger.

In 2015 Eindhoven University of Technology introduced the Nanny Fund to pay costs for children of employees attending conferences.

This year I changed my lifetime goal to give a half day tutorial on a specific test conference. I am still grateful for writing all my refused proposals. I learned to make better ones, My employer will cover some conferences and trainings, but as a born Dutchman I had to look at the costs.

This bold move was possible thanks to Maaret Pyhärjärvi, who made a spreadsheet. It is an overview of costs being paid by the conferences.

The next step was to look at delegate reports. What makes this conference great? How is the atmosphere? Can I learn there something useful? Do they share the same humour?

Basically where is all the fun?

This year Eurotesting Conference will cover the travelling costs of a first time speaker to a major test conference.

During my holiday I was challenged. Just search on #30daysoftesting on Twitter.  For one task I had to find an inspiring quote. That was difficult. I could browse blogs and books from famous testers, but that would probably not lead to a unique quote.

I still had a free pdf of Derek Sivers about attracting people as a professional musician. There were advises, which could easily be adopted by testers:
“If you don’t say what you sound like, you won’t make any fans.”
“Know who you are, and have the confidence that somewhere out there, there’s a little niche of people that would like your kind of music.”

Then I used the following quote:
“Every contact with the people around your music (fans and industry) is an extension of your art.”

A month later I was writing a proposal for a workshop for TestBash Netherlands. I was questioned to describe myself. Normally I would use a lot of credentials. I remembered my Twittered quote. Now I used humour to convince the program committee.

In August I got the news, that my half day workshop was accepted for TestBash. My adjusted life goal was sooner than I thought. And a bigger challenge than I had anticipated.  Some Huib used the word awesome to describe the line up.

This year EuroTesting conference interviewed every speaker, who had sent a proposal.

A week after the announcement of TestBash on the web I met Huib Schoots, the program chair. He asked:
“Did you see the program?”
“Yes, you were not on the list.” I replied.

The fun had started.