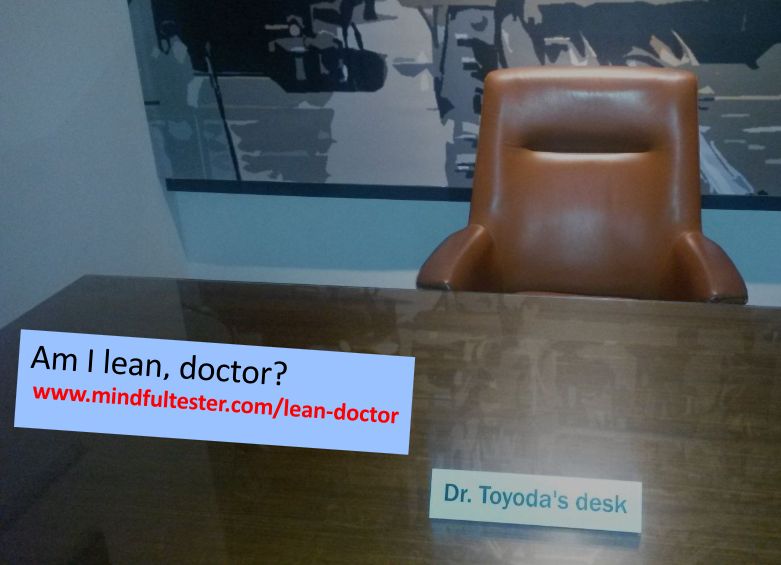 This summer I went to an extraordinary museum about cars. In the Louwman Museum in The Hague cars, which are landmarks in the history of the automobiles, were shown. The range was from motorized carriages to more familiar cars on the road. The owner had also a special interest in strange cars. I discovered, that electric and hybrid cars were already used at the beginning of the 20th century. Then a piece of furniture drew my attention: the desk of Dr. Toyoda. He worked for Toyota, which has a special approach for Lean Management.

For the test project I had two iterations, which took 3 weeks each. My planning for an iteration was simple: two weeks for the functional tests and the last week for the user acceptance test. To be more precisely 40 hours in the last week for 3 end users. I mailed the test plan to everyone and I got polite decline from the end users. In a normal week they had each 8 to 12 hours left in a week. So ideally 36 hours of testing would be filled in. But it was still too short. Overwork was no option. It was time to reschedule the activities.

A few months before I had bought The Toyota Way. It was mentioned several times by experienced Lean practioners, so I bought after browsing it. Heijunka, Level out the work load, came to my mind. If I somehow could move the testing hours of the end users towards the beginning of the test iteration, then the planning problem would be solved. Suppose function A was successfully tested during the Functional Acceptance Test (FAT), why should I wait to let this function tested by the end users? If FAT went well, then the first functions could be tested by the end users in the first week of the iteration. So I made new calculations: in worst case I have 3 end users, who have 8 hours left in 3 weeks, then I come to a total of 72 hours of testing. The new test planning was easily accepted by the end users.