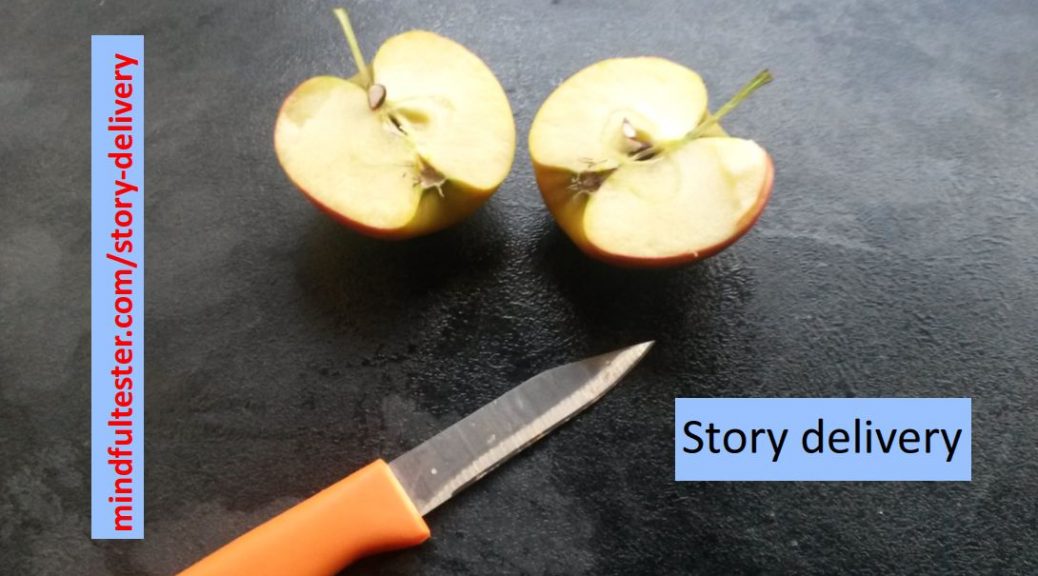 “The judge will also take delivery in consideration: the way you tell it.”
A colleague about a game.

“Do you know how they work at Toyota?” I asked a manager.
After a remarkable silence he responded carefully with:
“They keep their inventory low.” Then he continued to talk about it.
I nodded. “They also use Andon.”
“Andon?”
I told him, that every employee in the company was entitled to stop the process in order to improve it. Then I spoke about the benefits.
“I feel comfortable to tell you, what I think.” I added.
“I like to hear that”, he responded.

As a tester I frequently have to tell people, that something needs to be fixed. It is hard.

Why do people fail to deliver a good story outside their own company? Specifically at test conferences.

Whom did you choose?
In this paragraph I try to answer the question:
How is a good speaker selected for a test conference?

If there are two candidates with the same experience, it might be prudent to choose the one with confidence.
He is introvert, so…
So the next time there is huge chance, that the same person is chosen. He has more experience and more confidence.

Another way to create a bias in speaker selection is to use a proposal. I agree with people, that a good summary can be a good indicator for a good talk. I also want to write, that a talk is spoken and not written.
Yes, it is OK to read this blog post.
No, it is NOK to read the slides aloud.

If there is a woman eager to speak, then another bias might pop up. Most testers are men, so…

I once did an audition for a talk using my smartphone. It was a bad idea: I constantly look at the screen like child, who awkwardly observed a mirror for the first time. If I got a little help from a professional camera team, I would increase my odds twentyfold.
(But I am Dutch, so  …)

Another coloured opinion.
He has a Chinese name, but most testers I know, are white and male. So…

I am totally aware, that this is an unbalanced view of conferences.  There are test conferences, which actively promote diversity on their web sites or have a proper woman man ratio for speakers.
Last year I, a yellow male speaker, was greeted by an African European test conference organiser.
Last year I saw a conference adjusting his acceptance process within weeks.
This year a major test conference will have two female keynote speakers after a decent increase of 2.

Things are changing.  For better. Diversity.

Did you consider this?
A week after the Dutch Student Championships I had karate fight in the dojo. My opponent was better than me. He beated me all the time. I was in the student team, he not. So the best are not always in the spotlights.

Last year I asked a good tester, whether he would go to a specific conference. He answered with: “The usual suspects.”
BTW it is not the movie and I did not have to translate this from Dutch to English.

At the beginning of this century I heard a story about a famous tester. He knew how to be accepted at major test events. But
“He is telling the same stuff over and over again.”

Let’s agree about a few facts:

Suppose you want to have some small talk with the end users. With men it looks simple: drink a pint of beer in a pub. With female end users?

Back to work. How do you know, when female users are not pleased with the application under test? For agile methodologies this is important. Let me substitute “agile” by “all”.
That sounds much better.

According to the independent Central Bureau for Statistics (www.cbs.nl) roughly the half of the Dutch population is female in 2015. So the chance, that the gender of a common Dutch computer program user is female, is 50%. Probably getting close to 95 % for an embroidery app. That’s my best guess.

As a Chinese I belong to a minority. Only 1 of 5 people on this very planet is Chinese. Even a small percentage of more than 1 billion people can be a nice niche market.(I also heard stories about companies having a hard time in China. Maybe I am also hampered with a confirmation bias. :(
I am Chinese, so…

In 2000 I had to switch planes in New York. At the airport the signs were written in 2 languages: English and Spanish.

Who can help me?

For a hesitant speaker it looks difficult to change this process. There are ways for reverse selection.

Conferences are trying to find new voices for their stages. On a regular basis I get kind requests to send in proposals. Sometimes they are personalised. Years ago I had submitted several proposals to conferences and they didn’t forget me. I don’t mind this.

There are even special speaker slots for beginning speakers. This spring I surprised my colleagues, that I was not accepted: I was too experienced.

In April one test conference teamed up with experienced female testers to increase the influx of speakers of the same gender. Twitter showed a nice increase of proposals of the targeted speaker population.

TechVoices is one of my favourite things. [Update: TechVoices was formerly known as Speak Easy.] It is focused on diversity. Redirecting attention to experienced female speakers. Supporting wannabe speakers with crafting abstracts and talks. Securing speaker slots for newbie speakers. The mentors have a lot of experience, which can benefit first time speakers and conferences as well.

Where can I get practice?

Did you ever speak with friends, family members, colleagues, peers, delegates of a conference, attendees of meetups, or members of Special Interest Groups about testing? Or with total strangers? That can be scary.

There is no straight stairway to practice delivery of a story, but there are ample opportunities.

Teaching = Learning
The need for new speakers
Safety first
Do you want to talk about it?
In Case of Emergency Press 1

PS the picture at the beginning of this post is nothing special. I could make it a cliff hanger for the next blog post. That is not a good idea.

Some readers would like to prod me for the special cut technique I used to split the apple. The brand of the knife or the way I hold the fruit in my hand. The next obvious step would be to practice the cut for the next hours and then taking bets from ignorant friends.
[I already hear the sound of glasses, which are filled with cool refreshing amber coloured fruit juice.]

You’re still there.
Are you ready to read further?

I was just lucky to slice the apple in this way and mindful enough to take a picture.

I wrote you: it was not special.

Story delivery is not about the package. It is all about the content and the story teller’s view.