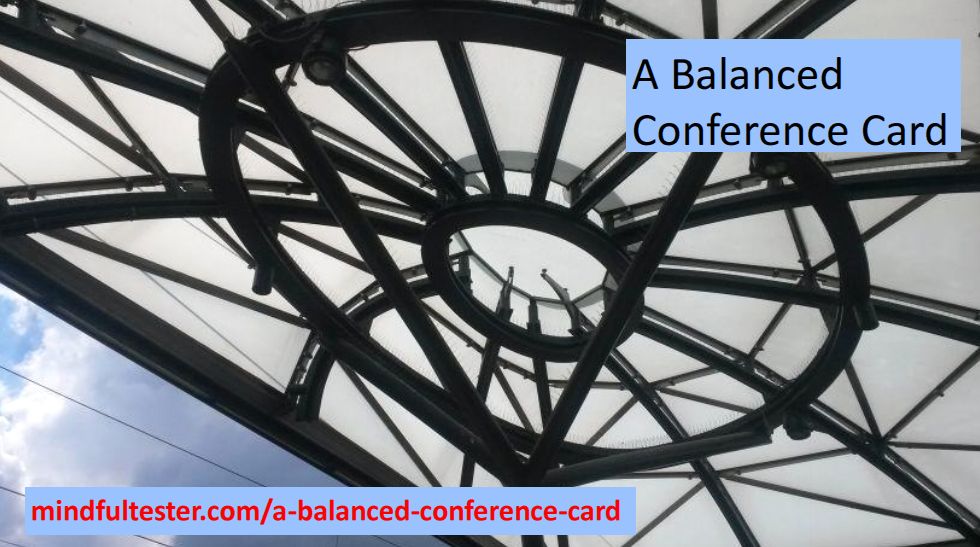 This year a woman thanked for joining a group of attendees at a tech conference. I forgot it, until social media showed a lot of interest in bad behaviour.

I planned to post this post weeks later, but the stories became more unbelievable as time progressed. One female speaker blogged about an invitation to share a room with the event organiser. Another female speaker did a remote talk after receiving death threats.

Last week a whole discussion on Twitter started about paying speakers. This basically means that not all relevant voices are heard because of the costs. According to me that is bad. I’ll write later on why.

These are some questions for conferences to provide better balance.

Looking at the selected speakers and talks, is there a good balance in

How do we know as conference organisers, whether the conference is balanced?

There is healthy number of yes.

Note about hands on:
If you want a dev conference, I understand live coding sessions and an occasional manager with useful tips for devs. For a C level conf – only people with Chief in their job title – I expect only high level speeches. A coder with the right level of abstraction might fit in. The target audience is something to think about.

Note about choices:
There are conferences which focus on the quality of the talk. This is dangerous: attendees get great stories from the same people or the same companies for years. Their company is not my company. I need different contexts to make a good choice what to apply in my firm. As my scrum master once summarised: “It was a consultant selling his own product.”

I would not be surprised to spend 1000 Euro just for speaking. This sum might increase, because conferences often take place in touristic places.
So I could go to my employer, but my budget is limited. I once paid all my travelling costs and I was really lucky that accommodation and food were included.

If I would be accepted for 2 talks at tech conferences abroad, I have to use money on my saving account. So it is pretty costly to talk abroad, if these are #paytospeak conferences. I have to pay to speak. I don’t even break even and I will lose money.
And I don’t bill all the hundreds of hours I spent to get a decent talk.

Now I gonna write something weird. Suppose I have a new revolutionary way to test software and I would speak at all #paytospeak conferences abroad, then my bank would really notice this within a year. Even if I am a keynote speaker.

Months earlier In my second week on the project there was something harsh in the air. For months the team had struggled with this software test model. The progress was low in the previous weeks. The male project members were starting to grind their teeth, when the African European woman politely requested to test two models. There were still grunts, but the other project members eventually gave in after friendly words from her.

So the project team split in two sub teams using two different models. At the end the outcomes were compared. The result was almost the same. Her model was the most easy one to use. The team spirit was back in town.

In that same week I got my Eureka moment. I could make some nice extensions to the model. Think about third and fourth dimensions. I only needed a push and she provided that.

One project day I met her. She was all smiling. She told me about a presentation of the model to her team mates. They were very experienced testers and they could not believe that the model was feasible for their context. She just answered all the questions all alone. And I had missed all the fun.

In the weeks before the keynote I asked her to speak several times. She replied with:
“That is not a place for me. You just talk.”
My project leader raised his shoulders:
“She is too modest.”

This is the story about an African European woman who used her kindness to save a project. This story is also about cultures. This is something I want to share with you the reader.

Note about proximity:
This year Marcel Gehlen explained the zone of proximity to me. If someone is in my zone of proximity, then I can easily tell how things can be done. An example, if you are an experienced tester and familiar with mind maps, I can point you to Test Insane.
An example how things could go wrong: one of my kids sometimes sighs very hard:
“Could you please explain this in children’s language?”

Most conferences tend to choose speakers with years of experience: a decade minus or plus 5 years in the subject. If I am unfamiliar with the subject, then there is chance that I don’t understand the speaker. I would call it a case of different proximity zone.

One evening I was browsing through a blog post. The same kid showed attention, so I showed a Visual First Person Customer Journey. Sorry for the click bait. I could not resist it.

I asked: “What is this about?”
“It is about a cinema visit.”
“How do you know?”
“It is the popcorn.”
[Pointing to the door with the heart]
“What does this mean?”

“It is the toilet.”
“How do you know that?”
“They use it in comics.””
I just had entered the kid’s Zone of Proximity.

Let me change the situation. I have to tell about my struggle with Test Driven Development in the first years. The first year I can really recall all the pitfalls I fell in. In the second year things become natural for me and the impact on TDD starters is becoming less and less. Basically my story has an expiry date. It will be lost unless I blog about it.

Experience does not always count. Warning: some absurd situation ahead.
“How many times did you do this?”
“About four times”
“And you think we should support you. Listen to your story?”
“Look I brought you a potato and tobacco. People will love them.”
“We had something else in mind: spices. Do you understand, Mister Christopher Columbus?”

Note about female speakers:
At the beginning of this month Cory Foy had almost no female candidates for CTO. He just tweeted and got 27 awesome candidates.  And counting.

What really stuck, was this statement:
“I don’t want to ever here an excuse for not having amazing females for senior positions or at conferences again. ”
Focus on conferences again? Good, keep this in mind.

This year a list of top test automation people was published on the web. This list was strange: there were almost no women on the list. A spontaneous brainstorm session started. A lot of names of women were mentioned. This lead to the following two lists of female testers:

Note about compensation;
This year an upcoming female speaker asked a #paytospeak conference about, how costs could be compensated. The answer was none except for keynote speakers. She was in the right league, so she asked for specifics. The conference answered that there was a limit. This could be called reasonable.

Unfortunately the limit amount could not cover the trip from New Zealand to Europe. This lady is one of the organisers of a conference in New Zealand which covered travel and accommodation costs for all speakers. Including one from the UK and one from the USA. This year.

Also this year. A female speaker had a question about a compensation for a co speaker. She wanted to talk about pairing in software development. The conference answered that only one speaker would be compensated. Now you can argue, that pairing cannot be demonstrated by a single woman or man. This lady happened to organise a conference which compensate the costs of all speakers, even the co speakers. BTW on Twitter I already saw one relieved female speaker of Euro Testing Conference. The plane tickets were compensated two months before the start of the conference.

TestBash has also great compensation for speakers. It was updated and republished after the #paytospeak discussion.

Note about harassment:
It was late in the evening, but the disco was packed. People were dancing on the floor having a good time. Some young women were approached by men. There was no contact, so another man tried, retried, and retried again. I knew these women. As a man I had to do something.

I just stood there looking up. I was like uncle Vernon looking at Hagrid angry that some family history had not been shared with Harry. The music started to fade for me as we locked eyes. I put all my indignation in my stare and did not back off. He put all his irritation in his stare …
and backed off.

Slowly the volume of the music went up for me. I noticed that people were dancing.

The following day one of the women thanked me. Apparently I had done something right.