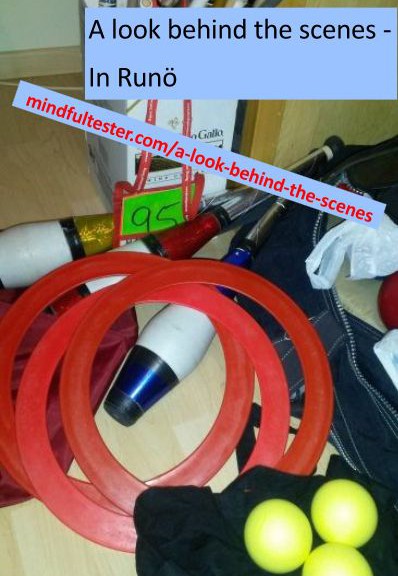 When I mentioned at Let’s Test Conference in  2015, that I came from the Netherlands, the following question was likely to be asked:
“Do you know Huib Schoots?”
My standard answer was:
“Yes. And he knows me.”

At Schiphol Airport in Amsterdam I was waiting to check in my suitcase. Behind my back I heard: “Hey ugly man” I turned around. Ready to confront this man. Huib was looking at me with his characteristic wide grin.

When I arrived at the belt to pick up my suitcase at Arlanda Airport, Huib was talking with Bill Matthews:
“Do you know him?”
“The juggler.”
Huub confirmed that with an
“A huh”.

On Sunday May 24 I arrived for the Let’s Test conference in Runö. In the conference centre one of the first testers I talked to, was Henrik Andersson.
“You asked me to do an extra juggling workshop. When would you like me to give this workshop?”
“This evening would be great.”
I agreed. On Twitter I had already seen a suitcase of Paul Holland packed with games.

That evening I packed 6 devilsticks with 12 hand sticks. When I arrived at the hall, Henrik saw me. He smiled and gave a thumbs up. I chose the bar room, because there was a lot of traffic. The chance, that people would join me juggling, was great. Henrik joined in. Even a man with a ponytail started juggling. The following moment I noticed, that Michael Bolton was juggling with one of my devilsticks. I did not believe my eyes. I thought about one of my advices in my conference workshop:
Don’t fear your peer.

I was so focused on my workshop, that I forgot to exercise answering the standard questions like

I was completely in the presentation mode: I had not practiced my small talk English. The proper translation of the Dutch word patiënt is patient?!

On Monday morning I could not sleep any more. It was the early sun rise. So I opened my laptop to add another bug for my exercise. For some reason testers like to find bugs. The modification went well. Within 30 minutes I had finished it and tested the program. The last thing, that I had to do, was uploading the file to a server. I opened a connection. I got confirmation, that the upload was successful followed by a cryptic message about a data connection. I looked on the server: the old file was removed and it was not replaced by the new one.

At that very moment I realised, that I had made a major error. I assumed, that the connection was safe. So I did not take any precautionary measures like renaming the file, which had to be removed. So I gave it another few tries to no avail. In plain English I had just ruined an exercise.

Then I looked on the internet. The plausible cause was the firewall of the hotel computer network, which did not support uploading files. So I used my smartphone (with a mobile provider) instead to upload the file and everything was all right at the end.

After the Monday morning sessions I was tired. So I went to my hotel room and had a long nap. Then I returned to the main building. I saw Ruud Cox, who was listening to Huib Schoots. The latter was talking about the building blocks of his workshop the next day and the time estimates of these blocks.

During his workshop on Tuesday Huib said:
“I always ask feedback.” And
“Tell every day to a colleague, what you have done that day. ”
“If you cannot find someone, place a rubber duck on your desk and start talking.”

So I went to an empty table. Then I noticed, that more speakers were gathered in the same room: Jean-Paul Varwijk, Joep Schuurkens, Michael Bolton, Laurent Bossavit (?). Probably improving their talks. I went through my slides of “What I learned from juggling as a tester” on my smart phone and juggled a little bit.

My facilitator was Duncan Nisbet. The familiar question popped up: “How shall I introduce you?”I mentioned 3 things, which should be included. Then I referred to this blog for additional information. Then Duncan introduced me as a “good storyteller”.

I had never told him a story before. I was just sharing some on this blog. Anyways …

Then I started with a story about a boy missing a foot and most of his fingers, who wanted to learn juggling from me.

On my ride to Runö I was sharing a cab with Bill Matthews, Chris Grant, and Dan Billing. The latter said something about the inner tester. The following morning I knew I had the perfect example for a story. Just before the keynote of Ben Simo I asked Dan permission to use this single sentence in my workshop. He agreed. On the last evening of the conference I told him, how I used it. This lead to a wonderful conversation about “needs, values and relationships”.

On one of my sheets I am wearing a dark and a white sock. Nobody mentioned it.  Maybe you do notice now.

On the other hand two unexpected bugs surfaced during my exercise: there was a huge error in a sentence. The second one was, that my exercise was not usable on an iPhone. I forgot the portability test.

During my workshop Henrik Andersson had entered the room. I was so concentrated on my presentation, that it looked to me he appeared out of nothing. I started talking about discovering a juggling trick. On the sheet the following text was shown:
“Create a framework to correct errors”.

“I did not discover this trick [helicopter], because my framework was too strict.”
Then I apologised to Henrik:
“Yesterday evening I gave a workshop. Henrik Andersson was present.
[Turning my attention to Henrik] If you cannot learn the helicopter, it is, because I gave you a too rigid framework. So I apologise for this.”

A question, which back fired

I showed a sheet with frequently asked questions about juggling to the audience. One of the questions was: “Do you juggle with fire?” I repeated this question aloud, followed by:
“This question was asked right before this workshop.”
One of the delegates got a red face and laughed hard.

Thanks for the workshop

While I waited for my cab, Kristjan Uba came personally to me to thank me for the workshop. I recognised him, because the evening before he was intensely observing Tobias Fors (?) and me solving the dice game. This was hosted by Michael Bolton. Kristjan wanted to learn the finer details of coaching this game.

Trying to look friendly I searched my memory for this man. Luckily Kristjan helped me by telling about juggling the devilstick himself. Then I noticed the ponytail. It was the juggling workshop on Sunday evening. So I juggled with 2 famous testers and a speaker.