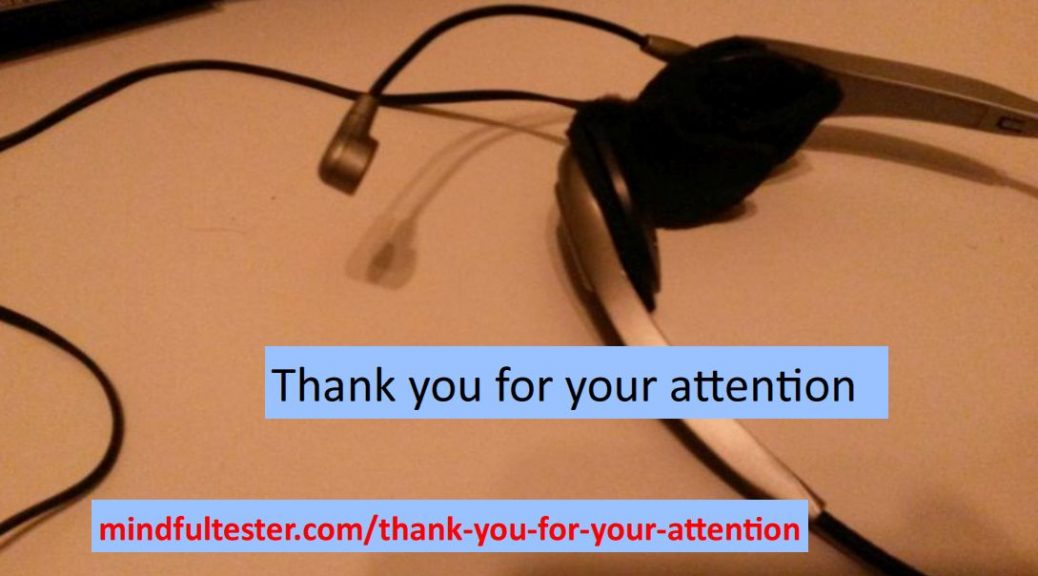 “I think I found something.”
All developers were looking straight to their screens. So I waited for a reaction.
“You can talk.” the Scrum Master said. “We are listening.”
I started to tell about my observation. One dev stood up and looked on one of my screens. He went back to his workplace. After a couple seconds I heard:
“I know where the problem is.”

We are both looking

A few years ago this actually happened to me.

The recruiter stood up and made a gesture to the desktop at the other side of the room. “Now you can show your presentation.”
I liked the comfortable sofa, where I was seated on.
“I can show it here.” I pulled my smartphone out of my pocket.
The recruiter seated himself next to me.

“This is the presentation I will give. It still is a draft version.” After flipping the first slides I started a casual talk about a performance test in the past. “On this slide […]” I described the situation.
“I am familiar with performance tests.” the recruiter remarked. I just filed his words somewhere in my memory. Hey, I can still remember them.

“If you look at the graph, […]” I zoomed in on the graph and talked about the lines: what did they tell me?
Slowly the storyteller came up in me. My tone of voice changed. I started to talk in an animated way. The story started to grip me.

I had something to tell.

Excuse me for the interruptions

Last week I started a delayed Skype session with my friend. After some small talk it was time to look at my workshop for Testbash Netherlands.
“Okay. I gonna share my screen with you.” He saw nothing. This was similar to a broken beamer. There was no reason to panic yet.

I switched to Plan B. “I will send you the presentation.” I picked a PDF loaded with Fieldstones.
“Did you receive the presentation?” I kindly informed after a minute. I got no for an answer.

A few moments I heard that my mail was in his spam box.
He put me on the Whitelist.
You’ve got a friend in me.

Later in the session I explained an exercise to him and off we went. “What would you do with the sticky note?” I got a reassuring answer. Now I came to the difficult part. He had to connect the imaginary stickies.

I could not give him visual clues. Therefore I focused on his voice. It sounded lower than usual. He was hesitating: there were too many options. So I added a constraint to the exercise. The tone of his voice became higher: that was positive.

Beginning this year I had visualised the solution within seconds. Now I had to breakdown the solution in small pieces for him. I took a metaphor to explain the first step. Confusion was on his mind.

Now I had to be patient.
I repeated the solution several times. Nope. I used other words. I did not hear anything. Then I revealed the solution a little bit and got a good response. Phew.
So I will have to simplify this. As simple as that.

Another exercise followed. The slides were not ready, but I had enough information for him. It took him some time to read it. That was something I could not influence as a workshop leader.

Then I told him his assignment. He told me in a steady flow, what he had found. He picked up the right information. Then he was sidetracked.
“O no”, I thought and kept my mouth shut. I really had to listen. He kept talking. By using logic he figured out the right solution. This went quite smoothly after all.

This exercise was too easy for the middle part of my workshop. I looked for it in the mind map for the second hour, but it was in the First Hour Mind Map. That was just fine with me.

I got valuable feedback by carefully listening and questioning.

A few weeks earlier I showed some slides to my wife. She was more than happy to recognise some pictures. But one slide was really bad and she had good arguments. Right. Make that wrong: I still need to tweak that slide. And yes, my wife is right.

I thank you for reading and the reminder to improve that slide. And uuuuh …. something else, which drew my Attention.

Just give me a couple of blog posts. It will spring in my mind again. Cheers.